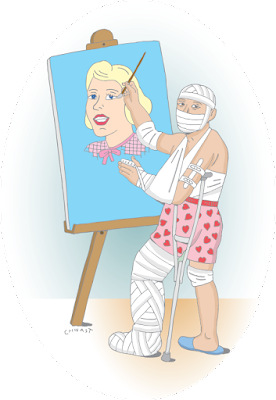 We’d like your help in making Seymour Chwast’s new book a reality. We're in the home stretch now, just ten days to go.

You may or may not have heard about the current Kickstarter campaign for At War With War, the 88-page anti-war tome designed and illustrated by Seymour, edited by Steven Heller with an introduction by Victor Navasky, former editor and publisher of The Nation. The hardcover 6.6 × 9.5-inch book prints two-color with letterpress text, three-piece binding, color-printed paper sides, Smythe-sewn and red cloth spine stamped in black.

For supporting the book we’re offering a signed edition of the first illustration Seymour did for 3x3. This Issue One OpArt piece will be hand-signed by Seymour and printed as a full-color giclée print and is available on all three tiers. Details about the three levels are below.

Pledge $99 or more
• Signed 3x3 OpArt image
• Copy of special edition of At War with War stamped with Seymour’s profile/pipe logo, and signed
• Inclusion of your name on acknowledgments page
• $99 (this is a substantial discount; the regular price for the special edition alone is $89)

Pledge $299 or more
• Signed 3x3 OpArt image
• Copy of special edition of At War with War stamped with Seymour’s profile/pipe logo, and signed
• Inclusion of your name on acknowledgment page
• Seymour chooses a sketch for you from a portfolio of 15 original one-of-a-kind sketches, and signs it. The sketch options will be displayed in a GIF file, promoted first to 3x3 supporters.
Join us in supporting this historic event. Seymour is already at 90% of the goal so don’t delay, act today. Select one of many pledge levels to support Seymour including clicking on the special 3x3 offers above.

Join us in supporting this historic event. Seymour is already at 90% of the goal so don’t delay, act today. Select one of many pledge levels to support Seymour including clicking on the special 3x3 offers above.

Milton Glaser and Beverly Willis To Speak at 92Y 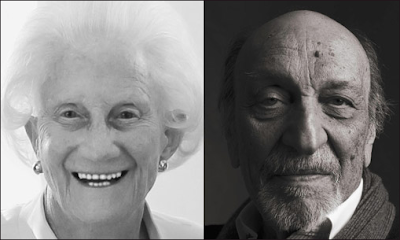 Beverly Willis has dedicated her life to architecture. Milton Glaser has dedicated his life to graphic design. Now both in their 80s and still making vital contributions in their disciplines,Willis and Glaser will discuss their expansive careers and provide inspiration to the new generation of designers.

Moderating the panel will be Aileen Kwun and Bryn Smith, authors of Twenty Over Eighty: Conversations on a Lifetime in Architecture and Design. The authors will autograph copies after the discussion.

About the book: Celebrating legends of design in their ninth decades and beyond, this book includes twenty Q&As with designers and architects over the age of eighty who are/were still active in their careers at the time of interview, including Milton Glaser, Beverly Willis, Seymour Chwast, Michael Graves, Jane Thompson, Jack Lenor Larsen, Ralph Caplan, and more. On sale May 24th. 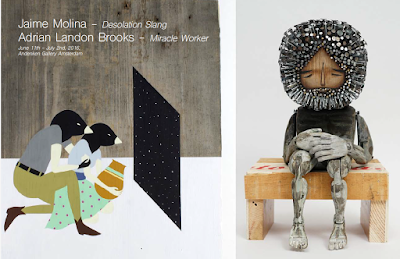 Andenken Gallery is very pleased to announce the solo exhibitions of two American artists; Jaime Molina (Colorado) and Adrian Landon Brooks (Texas). Both of these young artists use found materials and a neo-folk aesthetic in their contemporary and illustrative work.

Over the last 5 years, each of these artists have developed a symbolically rich and character driven pseudo-mythology that defines their work.

For Adrian, Juxtapoz magazine writes, “Adrian Landon Brooks’ drawings are beautiful and nightmarish, utilizing the simple combination of gouache and pen to create haunting illustrations of idols, icons and strange figures. These imaginings have a mysterious and powerful message, yet what that is feels slightly out of reach.”

On Jaime, Max Kaufman for Hi-Fructose magazine writes, ‘Jaime’s work has a fascinating narrative to it — this world he has created continues to become larger, and with his more recent sculptural works in the last few years, the denizens of his world are coming into the dimensional realm. These sculptures are where Jaime shines — built out of anything and everything at hand, they echo traditional folk techniques and ideas with a modern twist. It’s a great testament to using what you have, and making the best of it.’ 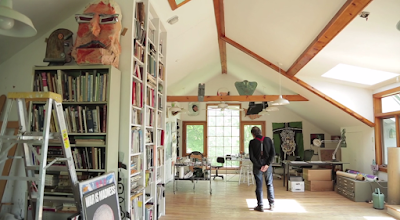 He needs no introduction, you mention his first name and you know immediately who we’re talking about. And here lately he seems to be everywhere.

There are several upcoming events featuring Seymour Chwast and a new short film that takes you inside his studio and thinking.

On Monday, May 16, as part of New York City’s Strand Book Store series Discovering Design, Chwast, along with Jack Lenor Larsen and Jane Thompson, will take part in the panel discussion Legends of New York City Design—showcasing lifelong design luminaries all in their ninth decade. These icons are included in the newly published book Twenty Over Eighty, by Aileen Kwun and Bryn Smith (Princeton Architectural Press, 2016), which will be available at the event. Tickets are available now.

On Tuesday May 24, New York’s esteemed Cooper Union marks the 65th graduation anniversary of one of its most famous alumni, Seymour Chwast, who will spend an evening talking about his life as a designer, activist, and author. Joining him will be design writer Steven Heller. A reception follows the talk, and both Chwast and Heller will sign copies of their most recent books.

The free event is open to the public and takes place in Cooper Union’s Rose Auditorium starting at 6:30 p.m.

And today, the Art Directors Club (ADC) and design company COLLINS are proud to debut the exciting new ADC Design Masters film series, kicking off today with a short film featuring ADC Hall of Fame laureate Seymour Chwast. The films — conceived and produced by COLLINS — are the first in a series which will take an inside look at the lives and careers of a select group of masters whose work continues to inspire designers and creatives of all ages around the world.

And if you haven’t heard about Seymour’s new book At War With War, there’s a Kickstarter campaign going on and getting closer to its goal. Check out the pledge levels and support this book.
Posted by Charles at 11:58 AM 27 comments: