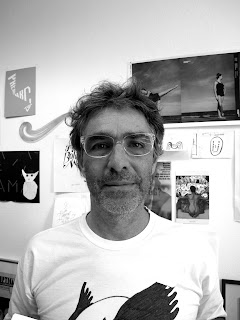 Kiko Farkas is a Brazilian architect, graphic designer and illustrator whose oeuvre includes cultural posters, book covers, children's books, identity, signage and annual reports. Kiko works with four assistants in his Máguina Estúdio in Sao Paulo where he has lived and worked his whole life.

Kiko is the grandson of Desidério Farkas, the founder of Fotoptica and son of Thomas Farkas, a respected photographer of Hungarian descent like László Moholy-Nagy, to whom he refers so often in his photographs. His home was filled with prints by Vasarely and originals by Edward Weston, a dark room and an extensive library of art and design books, advertising annuals as well as a record collection that included American jazz and popular Brazilian music. Music means a great deal to Kiko, he even played acoustic guitar in a band in college.

There were no graphic design courses at the Faculdade de Arquitetura e Urbanismo (FAU) at the University of Sao Paulo, everyone studied architecture. But from the looks of it it was much more like the Bauhaus with typographic studios, photography labs, wood and metal engraving workshops with a mix of visual programming, landscape and product design, and photography courses. Halfway through his education at FAU Kiko moved to New York to attend the Art Student’s League enrolling with an instructor who had studied under Georg Grosz. He says the first cartoon strip that inspired him was Hergé’s Adventures of Tintin and the first designer was Milton Glaser. Other influences were Saul Steinberg and later the Polish poster designers Roman Cieslewicz and Henryk Tomaszewski along with Paul Rand, A.M. Cassandre and Shigeo Fukuda. You can see these influences in his work.

“It’s one thing for a designer to be able to design a terrific poster, or maybe even two or three. If they are reproduced enough in biennials and annuals and all the other international competitions, the posters will, through repetition become iconic. I can think of many designers who have accomplished this, myself included. However, it’s quite something else for an individual designer to be able to assemble a massive body of posters, and only posters, all of equal quality, in one book.” So says Paula Scher.

His interest in art started early attending a museum’s art program at age six and later helping his father with a documentary movie when he was sixteen. The artistic ambience in the family home helped nourish he and his brothers, the brothers are both professional photographers and Kiko has the distinction of being the first Brazilian graphic designer to have a monograph along with many industry accolades. As Kiko says, “I believe strongly that personal work—aproach, way of thinking—is the best way to create a good relationship with clients and the the market.”

Kiko is one of our judges for the professional show.

What will Kiko be looking for?

“I will be looking for an illustration that has personality and can comment/find hidden meanings in the subject.”