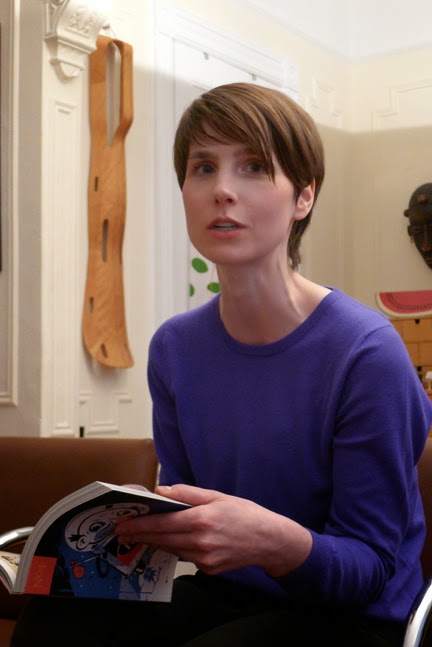 We had last seen Franziska when she flew over for a three-day visit and a portfolio review. She has been a past winner in our picture book shows so it was nice to put a face with the work.

Architect-trained Franziska decided early on that she preferred the design portion of a project rather than the nuts-and-bolts of building a building. Asked why she choose that route we found out that both her parents are architects in Germany, that an the fact that she grew up in Weimar close to the Bauhaus it was only natural that design and art would be in her future.

Due to the divided Germany she, unlike other young people in her country, didn’t learn English in school. As she puts it, “I was in the middle I didn’t learn Russian or English, only French,” to solve that issue she migrated to New Zealand for a three-month stay to learn English followed by a train trip from Malaysia to Shanghai where she landed a job at an architectural design firm. It was there that she decided to change careers and after a year’s stay she took the Trans-Mongolian Railway to connect with the Trans-Siberian Railroad back to Europe and life as a graphic designer and illustrator.

Splitting her time between a lovely home on the outskirts of Hamburg and the equally peaceful Weimar she chooses to spend her time in quiet places broken up by hectic trips abroad. She is a new board member of the German illustration organization, Ilustratoren Organisation E.V. and will represent that group at the European Illustrators Forum later this year. Future plans include trips to Oslo, Vienna and next year back to Bologna and yes, a trip back to New York. Once back in Hamburg she’ll retreat to her studio alongside her two cats, Jpeg and Tiff, energized by her experience in the big-city.
Posted by Charles at 5:44 PM