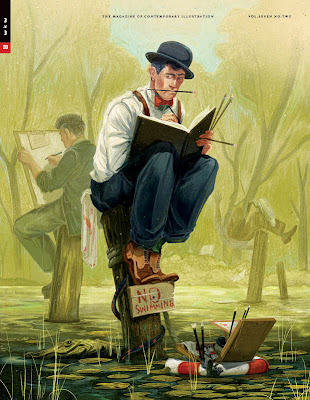 Great news, we’ve finished the next issue of 3x3 which features Jonathan Bartlett, Mark Smith from the UK and Wesley Allsbrook. And as a part of our redesign we’ll exhibit the winners of the 3x3 Student Show.

Since we’re focussing on young illustrators in this issue we chose a number of illustrators that have caught our eye and in addition to Jonathan, Mark and Wesley we’re showing the work of Jude Buffum, Peter Diamond from Austria, Aya Kakeda, Shannon May, Keith Negley and Yeji Yun from South Korea. And as part of CareerTalk we have an interview with Victo Ngai; rounding out the issue is our profile of Andrew J Nilsen, SF Weekly, Part Two of our Social Media Survey and our Icon is David Sandlin who is also our Educator/Illustrator for 2012.

With the holidays we should be on the shelves at the end of the month or first of January. You can pre-order your copy now online, or better yet save 20% off the newsstand price by subscribing. Full details online. 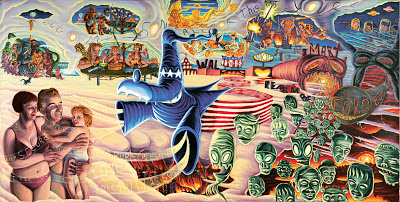 Looking for a gift for someone on your Christmas list? Or how about a gift for your favorite art director? Or just a little something for yourself? Might we suggest a gift subscription to 3x3 Magazine. There’ll be gift for them and something special for you.

It’s the gift that keeps on giving throughout the year at a price that is affordable. Just $54 for a year-long subscription to 3x3—save 20% off the cover price. Or you can order a digital version for just $27.99—that’s almost 60% off the cover price. And if you order a print subscription for someone, we’ll send you the digital version free—this offer expires on December 17.

It’s so easy and safe with our new ordering process and if you tell us it’s a gift we’ll be sure to include a specially-designed gift card announcing that you’re the gift-giver.

Be sure to order soon, we’ll need your order no later than December 17th to make sure it gets in the mail.

So what’s stopping you, it’s a great gift full of great art, wonderful stories about illustrators, career advice, profiles, the results from each of our shows and great peeks inside studios—perfect for under any visual person’s tree. Just click here to order. Perfect.

From all of us here at 3x3 we wish you a very happy and healthy holiday season and an ever brighter new year.