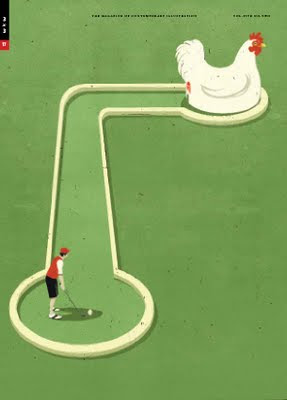 Our final show of the season is complete, the judges have made their selection and we’re ready to announce the winners. This was our largest children’s show ever and there were many excellent pieces entered and as a result we’re awarding the most medals ever.
Congratulations to our Best of Show winner Gary Taxali, Canada, for his children’s book, This is Silly and to our gold medalists, Nancy Chiu, USA; Sandrine Mercier and Sara Gillingham, Canada and Constanze Von Kitzing, Germany. Click here for a complete list of medal and merit winners.
Our international panel of judges for this year’s 3x3 Children’s Show include Paolo Canton, Publisher, Tipipittori, Italy; Cynthia Matthews, Creative Director, Mudpuppy; Yvonne Silver, Art Buyer, Scholastic; Christine Kettner, Art Director, Clarion and Harcourt Children's Books and illustrators Camilla Engman, Sweden and André da Loba, Portugal—presently residing in the US.
Winners will be featured in the 3x3 Illustration Annual No 8 due out in December. In addition there are plans to offer a separate book of our children’s show winners which will allow a larger format to showcase the work, stay tuned.
Posted by Charles at 9:11 AM 63 comments:

What’s unique about the 3x3 Student Show is that it is truly international. Work was entered from over 16 countries and over seventy-five universities, colleges and art schools whereas most shows stay within their countries borders, we expand past our own.

Congratulations to our Best of Show winner, JooHee Yoon, Rhode Island School of Design who won the unanimous votes of our judges and will receive our $1,000 cash prize. And our Gold medal winner with two gold medals, Sean Lewis, Ontario College of Art and Design, Canada receives a $500-cash value prize. See the complete list of winners.

Having just wrapped up our show season last week with the announcement of our children’s show winners I have to say it was a bit disheartening to receive the following email from a children’s illustrator rep in London. I’ve heard said that you can gauge a total response by multiplying that response by twenty-five. So there are possibly another twenty-four individuals out there holding the same opinion.

Here is the email verbatim: “After spending many hours entering our AWARD WINNING (their caps) illustrators into your publication and not getting any of them in - you have the audacity to ask us to pay more for a page in your magazine (sic). Not only do we not want to pay for a page of advertising we will NEVER (their caps) be entering anything into your publication again - please remove us from any of your mailings in future.”

What this rep is referencing is our invitation to selected artists they represent to be a part of the 2012 3x3 Illustration Directory, the discounted page rate is $375 for those who enter the show and the Directory is not open to everyone, we only select those artists we want in the directory though all winners are automatically invited. And is denying one or more of their artists an opportunity to have a presence in a directory that reaches a potential market of those who commission illustration at a more-than-fair price really in the best interest of the artist? Isn’t the reps responsibility to help promote their artists? Here again a bit of frustration, we’re not charging thousands of dollars for a page in our directory, we’re making it as affordable as possible while at the same time only exhibiting those illustrators we select.

But it raises a far greater question of entitlement, does this rep think that because they spent hours—which is an exaggeration, they entered three children’s books—entitles them to a spot in the annual? Do they feel that their “award winning” artists deserve a spot in every show? Perhaps there are other shows out there that would look at the fact that someone invested enough money, or time to enter the show that they should be rewarded by an acceptance. A show might view such acceptance as a means of guaranteeing continued entries from this individual or group. Sad to say, there are such shows out there. They have quotas and reward artists each year just to make sure they continue to support their show. But what value is a show that operates that way? And maybe, just maybe I’m being totally naive here for thinking that there is another way. And by operating the way we do are we really losing entrants each year by the mere fact that a panel of judges didn’t feel their work merited acceptance?

Ours is perhaps the fairest type of show out there. All work is judged independently, the judges never meet, the judging is done digitally and takes place on their individual desktops, they have two weeks to complete the judging process and then all judging sheets are returned to 3x3 for tabulation. So the fact that an image, or book, doesn’t make the cut is at the sole discretion of the judge’s votes. I personally have been entering shows for the past thirty years, I get in some but a lot I don’t but it never stops me from entering again as I always feel my work improves and should have a shot, and I keep in mind that the judges change each year.

Not all really good work is accepted into shows, many pieces entered in our shows are just one vote shy from getting in but to have real meaning in having work judged is that the work must meet certain higher standards of exceptionalism; the criteria should never be the number of pieces entered or how long it took to prepare the entries.