Herman Miller Looks at Our Studio 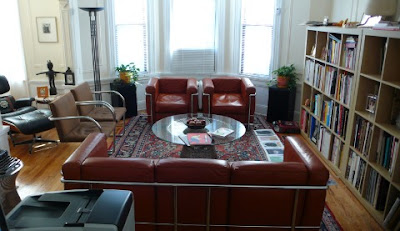 Herman Miller is as you may know an American manufacturer of office furniture located in Zeeland, Michigan. The company is famous for producing the mid-century work of Charles and Ray Eames, Gilbert Rhode, George Nelson, Isamu Noguchi, Alexander Girard and a host of contemporary designers. And for those who don't know, Herman Miller's Aeron chair is the ubquitous chair of design studios and office environments.

This week's Herman Miller Lifework Blog features our live/work space in Brooklyn. For a peek inside and my interview with editor, Cerentha Harris, click here. Just a note, not all furniture you see in the feature is Herman Miller's, we also collect works by Mies van der Rohe, Warren Platner and Le Corbusier.
Posted by Charles at 3:15 PM