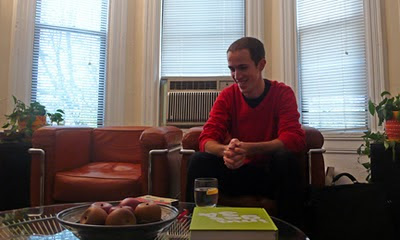 Last week's American Illustration Party drew a number of foreign visitors to the city and we had the pleasure of having one of those illustrators over to the studio for lunch. Peter Diamond is a native of Canada and attended art school in Nova Scotia, receiving a degree in fine art. He only took two illustration classes as part of his schooling and pursued a freelance career working with small bands in Canada before concentrating on editorial illustration. He now calls Vienna, Austria home. How did he end up there? His girlfriend who he met in school is from there and it was less trouble for him to move to Vienna than for her to move to Canada. At some point he might consider returning to North America but for now he is content with his new life in Europe.

The really interesting part of our lunches with illustrators is to hear the backstory of how they got to where they are today. Peter's was no less interesting. He would call himself a born-slacker, dabbling in this and that and not really concentrating on his studies or listening to the words of his professors. And then two things happened, the death of his mother and leaving school and having to make a living. Both forced him to grow up fast.

I'm sure the transformation didn't happen overnight, but in conversation he has the sensibilities of a successful illustrator who's been doing this for the past ten years or so, not the two that is reality. I was curious how this happened, but in the discussion it was apparent that he was simply smart enough to know what he didn't know about the business side of illustration: how to find work, how to promote, how to be an illustrator. And he just started looking for answers, a slacker no more. His father was an ornithologist who had various government jobs in Canada and his mother was an archivist, neither would be an influence on his newborn business acumen though he can attribute his organizational skills to his mother.

The work itself shows a maturity of someone who had studied illustration for four years, maybe even having a graduate degree, not someone who dabbled in fine art. Peter attributes this to a career-changing workshop given by Yuko Shimizu in Venice and more recently an online Tutormill session with Chris Buzelli and Marcos Chin.

He has recently made a concerted effort to make himself more visible in the marketplace, not only to potential clients but to the illustration community at large. He was overjoyed at being in the midst of the enormous talent pool that showed up at Thursday's AI Party and waded through the crowd to meet as many of his heroes as possible. He also came as a representative of a fledgling new illustration organization in Vienna, Illustria, hoping to share what he found with his compatriots back home.

Looking back on our lunch conversation it reminds me of watching a plant grow: you plant it, feed it, water it and it sprouts new growth, get's taller and begins to bear fruit. Peter is no different.

When I saw Peter's work for the first time I was convinced that he had been around a long time and that somehow I had overlooked him. I expected to be visited by a wise older artist, the wise part was evident and he comes off as much older than his years.
Posted by Charles at 6:39 PM