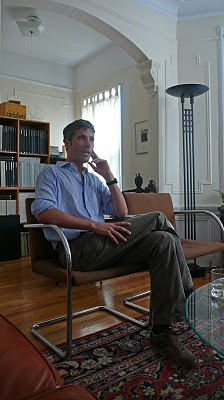 After a delightful quiche, a few glasses of red wine and a homemade raspberry/red wine sorbet, the lunch was over and Oliver was on his way back to the City, the city he might one day call home.
Posted by Charles at 7:33 PM 16 comments:

Design is hard. Good design is harder. Great design is near impossible. I am about to start designing the next issue of 3x3 and I've been putting it off for weeks now. I fret and worry, stall and stir around ideas in my head, pay bills, check my email and Facebook all delaying my attempt at designing the magazine. It should be easy, the grid is there, the images have been selected, the text has been written and edited but I'm scared to start for the fear that I won't create anything really special.

A friend of mine and I were having a fairly heated discussion about design the other day—of course it wasn't face to face it was on Facebook. He had asked what I thought of his new design for a magazine that he's an art director, creative director, design director—whatever label you want to use—of. I had been afraid he'd ask that question but I had to tell him I honestly thought it was a poor design. He had taken a fairly dull, uninteresting publication and transformed into something that wasn't that but in my opinon had turned into something butt-ugly. Every page literally shouted with heavy-handed type, bright colors and uneven columns of type. No rhythm—no ups and downs, just ups. No air to breathe, no pause to take. His rationale was that there was a rhythm when everything is shouting. It became apparent in the conversation that his interest was not in conveying information it was to put out a visual forcefield in hopes of attracting a new audience or at the very least keeping the readership they have. Content was of no matter, design was king. My old age started to show, I've been designing for over three decades now—four if I tell the truth and my goal has never been for the design to be king—quite the contrary, I don't want the reader to see the design. It's the same way I created television spots—I called them dumb spots— I drained all the glamor and put the message out there as simply as I could. The idea was king  and that's what people remember and respond to. I remember one spot in particular, it was our first Subway Sandwich spot where we showed greasy food, a man's button popping off his shirt and the tagline: Half of Subway sandwiches have 6 grams of fat or less. The spot ran on Sunday, Monday at lunch they ran out of food and had customers lining up outside the door. We became heroes, no one had ever created a spot in their thirty-year history that saw such dramatic sales numbers; we were invited to the national conference and a franchisee there said while he liked the spot he said, "We can't run that spot on national television." It didn't meet his criteria for a national spot. But it worked and it worked in every market it ran in and it worked better than the spot national ran with all the glitz and glamor. A good idea is all that matters.

Content i.e. text can be the hero or visuals can be the hero, sure they can work together but not at the same time. His comment about the state of design publications is that they are all dying, his goal was to save at least his publication from that fate. I brought the conversation back to content, too many publications offer the same content—the same personalities, the same advice, the same stories with just a slight twist. It's difficult to find good content, we only have so many stars in our industry so everyone knows that's a good read and a draw for an audience to buy or subscribe. So we end up recycling stories and that's why these publications are dying. Face it do we need more than one graphic design magazine, one illustration one, one fine art or photography magazine? I think not.

I agree design plays a part in keeping magazines alive, there are magazines that I cannot bear to read, they are not inviting no matter the content and sure there are dull magazines as well that show no life no matter the glossy images. But must we scream our message for anyone to hear? I own a collection of Alexey Brodovitch's Portfolio magazine—there are only four published back in the early 50s—and have long admired his use of space, texture and type; certainly he broke the rules in format, design and committed the ultimate sin, no advertising.  He had free reign in design but each and every page is built around content and it looks as fresh today as it did the day it was created. That's my hope for 3x3, that someone sixty years from now will be picking up a copy and marveling not at the design but the lack of it.
Posted by Charles at 6:57 PM 14 comments: