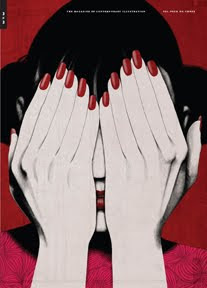 Our 3x3 covers continue to rake in the awards, this time it's a Gold medal for cover illustration from Sweden's illustration organization, Kolla for our Issue 12 cover. Congratulations to Krister Flodin.
Posted by Charles at 5:29 PM 47 comments: 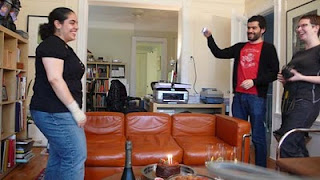 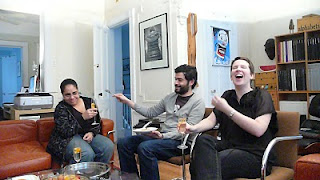 We celebrated two birthdays during the month on April: Jessica Quiñones and Sarah Munt. Since Jessica's actual birthday was on the weekend we celebrated hers on Friday serving a lovely chocolate cake from a Brooklyn bakery on 7th Avenue along with cocktails made with St Germain and Proseco with a touch of lemon peel. And on the 22nd we celebrated Sarah's birthday with the same delicious cocktail, but the ultimate surprise was Jessica's homemade flan dessert which was out of this world!
Pictured: Jessica Quiñones, André da Loba and Sarah Munt.
Posted by Charles at 11:36 AM 24 comments:

Only about ten percent of my time is spent being creative, ninety percent is spent on the mundane tasks of running a business. And now that it's show season part of my duties include helping log in entries, thankfully I had to get this issue out so my time has been limited in these non-creative tasks. But one thing I'm seeing puzzles me, the use of gmail, hotmail, earthlink and even aol used as an email address to contact our entrants. My personal opinion is that the email address should tie directly to the illustrator's website and be as simple as possible: firstname@fullname.com. Why you ask? It's the simplest and best way to promote your name and have an art director remember it; it's a reinforcement each time they email you, or receive one from you.

To me, someone with a hotmail account is a student, one with a gmail account is a step up but still not arrived;, when I see an aol.com account it looks like the person hasn't kept up to date. Even when I see someone with a web site and then a gmail account I'm assuming that they haven't been in the business very long. Not a signal you want to be sending out there. You need to look established from day-one, there is no gradually entering the industry, the moment you start searching for work you need a web site and email address that match up. Keep the gmail accounts for personal business, but make sure your business email reinforces your name and establishes you as a resource.
I've also seen the gamut of email addresses and web site names that all lead to confusion and many times are not only hard to remember but also difficult to type in when you're trying to contact them. Using happyartist@idrawpicturestosell.com is not a way to market your work as an illustrator. You've got to imagine an art director trying to remember who was that person we used three or six months ago on a project, the supposed catchy name will never replace a real name—the name that goes on the purchase order, your invoice and on the check that goes out. Make it easy, just keep it dead-simple.
And always have your web site on every email—hyperlinked so it's dead-easy to get there—and your phone number, never send out an email without several ways for someone to reach you, no matter who you're sending to. It's so easy to setup a standard signature in Mail, you can even select typefaces for a custom look. We get a ton of mail here from illustrators who just give us their email address; no url, no phone number and I suspect their doing it with every email. That's no way to promote yourself—no way to grow your business.
Posted by Charles at 6:42 PM 22 comments:

Email ThisBlogThis!Share to TwitterShare to FacebookShare to Pinterest
Labels: Email, For What It’s Worth, Promotion

No 12 Receives Another Honor 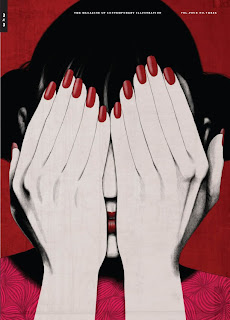 Just got word from Krister Flodin that his cover for 3x3 Magazine's issue number twelve is a winner in the Swedish Illustration & Graphic Design competition, Kolla! Congratulations to Krister!
Posted by Charles at 2:53 PM 10 comments: 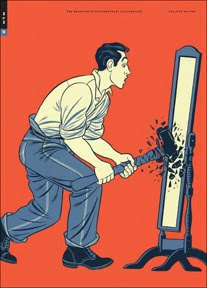 Another honor for Nick Dewar's cover for 3x3, this one comes from American Illustration 29.

From an impressive 8,033 pictures entered by over 1,200 illustrators, magazines, agencies and publishers, the jury selected only 388 images by a majority vote or better to appear in the book and represent the best images from 2009. AI29 will be printed in full color and distributed world-wide

There was a brouhaha going on on Drawger yesterday that every illustrator, designer or photographer should take note. A writer working on the web for a mega-media corporation lifted a piece by Chris Buzelli without permission. Upon getting caught his first reply was "No one is going to take a 200-pixel reproduction of a larger piece and call it art. No one is using it as anything but eye candy, and those who like it are going to use links to seek it, and the artist, out." And this was not a first instance by the writer to use art without permission, he went on to explain, "I get paid for what I write, not for the illustrations accompanying them. If I had to get permission for every illustration I used I wouldn't have time to get any illustrations on my articles and would likely not make any money. So I developed this policy, which usually works. I seek to give credit. When I can find one, I even seek a place where the illustration's being sold, and link to that."

There are two problems here: one is the value has decreased so much for art that is less than three-inches that it is considered free? You can certainly follow the logic in that a cover is more expensive than a full-page which is more expensive than a spot illustration. The problem we have is that we are judging things on size and not exposure. As we know not every publication pays the same fees for illustration or photography, it depends on their circulation—the larger it is the more it can budget for content. So taking something that's going to reproduce 200-pixels will not see the same value compared to something being seen as a spot or full-page—we've just trained ourselves to think along those lines. We must get back to the "reach aspect": how many people are going to see this article and art? Thus art on the web is priced on the same scale as print, the more people that may see it the more value it has and therefore the more it should cost. We need to start thinking of budgeting and pricing in these terms and get away from how large or small the art is being used.

The other problem that the writer and illustrators face is that no one wants to pay for content. His complaint about not having time is probably true—he's making his money on volume, no single article is going to pay the rent because the content is not being paid for at a premium in the first place. And we're all to blame for that. We think nothing of going online daily and reading any newspaper without paying a single cent. We're paying pennies for downloads for music or a per-movie cost of cents not dollars to view almost any film we want to see. We are not valuing content at all, we're all looking for the cheapest route to go without regard to those who have prepared what we're watching or reading or to the companies that employ those that produce the content. We as consumers have been schooled that a subscription of four to twelve dollars is about all we're willing to pay for a year's worth of content, so advertising is the engine that affords us printed content. At the moment a banner ad is dollars not thousands or millions of dollars so any company trying to budget for content on the web is faced with a very steep hill to climb. How do you pay for content when the revenues aren't there?

So it's a problem for us as well as writers and photographers. We all love technology but you must admit that it's shrinking the size we look at objects. And the value of what we see has decreased exponentially and since for the most part it's free we place no value on it at all or at least not a monetary value.

The writer's heart was in the right place when he selected an illustration over nothing, he saw the value of adding art to the article he's written but what he's asking us to do is to join him in down-valuing content. I wonder what would have been the result if he'd have asked any of the artists he's used if he could "borrow" the art and give credit along with a link to the site? Are we amenable to that? To me the text and the art are the content of the article, one reinforces the other as any really good illustration must do.

There is no way we can police the internet. The web is an open door to expose the good and the bad. But we should try to protect ourselves. What I've noticed in my own exploration of artist's sites is that they are more likely outside of the US to use Flash on their sites to show their art which takes a lot more effort to "borrow" than to Control, click the image. I also notice that many of these sites are very explicit about not using any part of the site without the express written permission of the artist, another good step to hinder the "borrowing". It's like a burglar alarm, it won't stop the thief that is intent on breaking into your house but it is a dissuader. It's time to protect ourselves in every way possible but collectively we must resolve the value issue for illustration in an ever increasing smaller world.
Posted by Charles at 6:33 PM 13 comments:

Email ThisBlogThis!Share to TwitterShare to FacebookShare to Pinterest
Labels: Chris Buzelli, Drawger, For What It’s Worth

Three times in a row 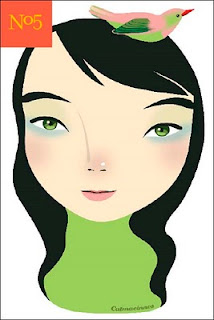 We just got word that one of our entries has been accepted into this year's HOW International Design Awards show, this is the third year in a row that 3x3 has been so honored. This year's winner: The 3x3 Illustraton Annual No. 5 with cover art by Cat MacInnes. And we're pleased to announce that annual No. 5 is totally sold-out.
Posted by Charles at 3:13 PM 12 comments: