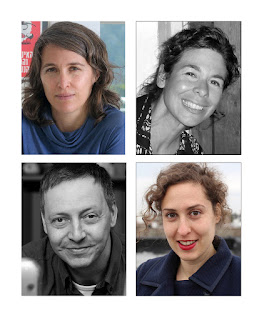 This rounds out the judges for our 3x3 International Illustration Awards Show No. 14. We’re pleased to have illustrators Orit Bergman and Andrea D’Aquino on our Picture Book Show panel and adding Julia Rothman and Dieter Braun for the Professional Show.

Since a child Orit has always done two things: drawn or painted and told stories. She studied visual communication at the Bezalel Academy of Arts and Design, where she is now head of the Illustration Department. Bezalel was the only academic institution in Israel that offered a degree in visual communication; it was there that she realized her passion for illustration. “I  like to tell stories with the illustration. This is what I am doing, and it is what I am. Illustration is not my profession, it is my vocation—a way of living, a large part of my identity.” But since the Israeli market is quite small and there is such a high concentration of good illustrators she has had to work in a variety of areas. This led her to write and illustrate ten books and illustrate a dozen more, develop plays and the backdrops and props for them. Her environment has an influence on her work, “I’m inspired by the nature around me, the changing of the seasons, and the endless variety of shapes it takes. I also draw inspiration from my frequent train rides, where I can’t help but overhear many stories (people in Israel talk loudly on their cell phones), and where I have time to daydream.” www.oritberman.com

Andrea doesn’t like labels, while she’s been an ad agency art director, graphic designer, illustrator and writer, she prefers the label “creative”. While working as an art director had it’s perks: “I designed ads for Giorgio Armani, did shoots with Kate Moss, been on film sets with great cinematographers for TV spots that I’ve written, and collaborated with some of the best illustrators and photographers around. But somehow, as wonderful as all that is, I still found myself somewhat creatively unsatisfied.”  So she spent several summers in Italy, France and Spain and somewhere along the way she rediscovered her own creative nature and how to express it not for a client, but for herself. Drawing has always been a part of who she is, influenced by all matter of images from medieval to contemporary art, “I love medieval art for its magical story-telling quality, as well as Persian art. Inventive and unexpected uses of color is usually at the heart of what I like most.” She’ll admit, “Some of the best things I’ve made are mistakes, however this does not imply sitting and waiting is any kind of effective choice. I think all art is work, it takes effort and doing things over or just organizing and experimenting without a clear cut goal or without seeing pleasing results.” www.andreadaquino.com

Julia is a native New Yorker, her Hello NY: An Illustrated Love Letter to the Five Boroughs was praised by the New York Times, New York Daily News and on WNYC’s The Brian Lehrer Show. She has also created illustrations and pattern designs for newspapers, magazines, wallpaper, dishware, bedding, books, billboards and subway posters. And if that weren’t enough she has authored and illustrated nine books. When asked about advice for young illustrators, “I always hear illustrators talking about how worried they are now since ‘print is dead’.  But I think it’s important to think about the wide range of applications for illustration—everything from toys to textiles, to packaging and advertising. There’s plenty of work for illustrators.” About her own work,“ Often I look back at something I made and have regrets about doing a better job. The mistakes stand out like they’ve been circled in red.” A little known fact about Julie, back in high school and during summers in college she worked for a DJ as a ‘party motivator’, “I would go to fancy parties and lead the line dances or try to get people to dance. Nowadays I would never have the guts to get up and dance in front of crowds of strangers—well maybe after a few drinks.” www.juliarothman.com

Dieter loves animals especially following an African safari he and his wife went on. Growing up in the city of Dinslaken in the North Rhine-Westphalia area his parents were supportive of his interest in art and gave him a set of oil paints and an easel when he was ten years old. Though he felt he was a bit too young, he did try his hand at painting, “At first (they were) quite amateurish, but in time my paintings became better. And eventually I realized that I wanted to do it professionally.” He studied communication design at Folkwangschule in Essen and after trying different forms of design he gravitated towards illustration, “During my studies, I accepted my first assignments as an illustrator for small agencies in the Ruhr area, and I thus financed my life in Essen.” Today he works in Hamburg and sees himself as a classic applied illustrator though he has expanded into gallery work and as an author. Asked about the industry, “We are bombarded all day with photos, both with great, artistic, as well as with everyday mobile phone photos. It is perhaps easier nowadays to use the illustration to find their own special language.” His latest book Die Welt Der Wilden Tiere, is an illustrated book of wild life. www.brauntown.com