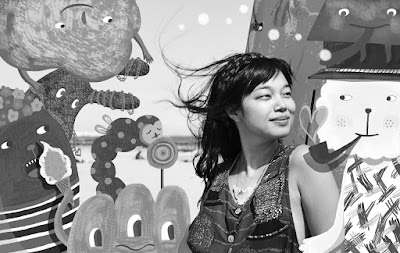 Aya Kakeda is an artist, illustrator and sculptor working in multi-media whether it’s brush pen, gouache, silkscreen, embroidery or clay. Aya was born and raised in Tokyo and divides her time between her Brooklyn studios—an illustration studio with five studiomates, a home studio where she does her personal work, and a ceramic studio—and Tokyo. She earned a BFA from the Savannah College of Art and Design and an MFA in Illustration from the School of Visual Arts, and is currently teaching at Fashion Institute of Technology in their MFA illustration program. She also performs workshops and lectures at universities and museums.

Her illustration often depicts her imaginary ToTai Island and the creatures that live there. She has been awarded medals for her work from the Society of Illustrators, Society of Illustrators Los Angeles and from 3x3 Magazine. Her clients include Disney*Hyperion Books, Kid Robot, The New Yorker, The New York Times, Nike, Delta, Runners World, Nickelodeon, Noggin TV, PlanSponsor Magazine, Men's Journal, Roger la Borde, Macy’s, HongKong Mega Mall and Time Out Magazine.

In addition to her commercial illustration work, Aya exhibits her work at galleries nationally and internationally as a fine artist. As a performance artist she appears as part of the Moustache Sisters, having performed at the Brooklyn Museum, The Philadelphia Museum of Art, The High Museum in Atlanta and a display installation at Macy’s, New York.