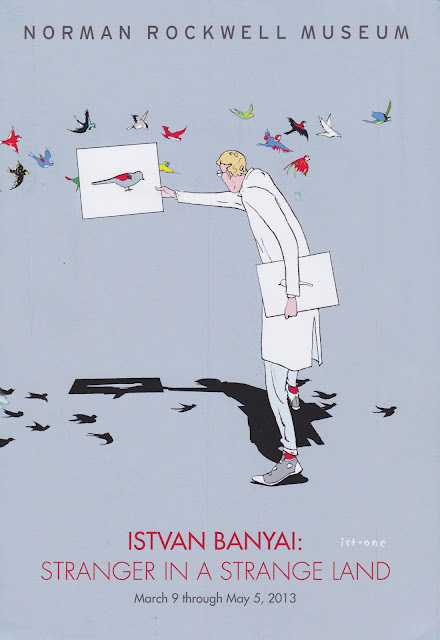 Norman Rockwell Museum continues its ongoing Distinguished Illustrator Series this spring by exploring the work of the innovative Hungarian-born artist Istvan Banyai, whose unique approach to image-making found an unlikely home in the United States; the exhibition, Istvan Banyai: Stranger in a Strange Land will be on view at the Museum from March 9 through May 5, 2013.

“The intelligence of Istvan Banyai’s imagery and elegance of his execution captivated me from the start,” notes Norman Rockwell Museum Chief Curator Stephanie Plunkett. “In his smartly constructed visual world, people move fluidly through time and space, eerily disconnected from one another, and shadows seem to have a mind of their own. Pointed in its commentary, Banyai’s art also conveys an air of quiet mystery, and his absorbing illustrations inspire more questions than answers, a reminder that things are not always what they seem.”

Istvan Banyai’s elegant, incisive artworks have been sought after by clients throughout the world; his striking imagery has appeared on the covers and pages of The New Yorker, Atlantic Monthly, Playboy, Rolling Stone, Mother Jones, The New York Times, GQ and Esquire, and in work for Absolut Vodka, Nickelodeon, MTV Europe and Encyclopedia Britannica. The artist is also the creator of such acclaimed children’s picture books as Zoom, Re-Zoom, The Other Side, and REM, whose unexpected perspectives have made him one of the most original and iconoclastic illustrators today.

A special exhibition opening event will be held at Norman Rockwell Museum on Saturday, March 9, from 6 to 8:30 p.m., with commentary by Istvan Banyai at 6:30 p.m. A reception will follow with a taste of Hungary, including refreshments and a cash bar. Admission to the event costs $20, free for Museum members. RSVP by March 1 by contacting the Museum at 413.931.2221 or rsvp@nrm.org.