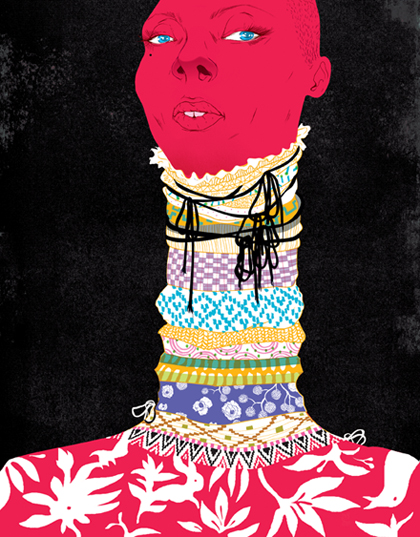 Marcos Chin
I am often puzzeled why there are not more female illustrators
It seems to be to be a field dominated by men.

I was speaking with illustrator Scott Bakal about this over lunch at the studio
And the two women I work with presented a theory which seems plausible.
Women are more pragmatic than guys.

Guys don’t mind sleeping on the floor
Or someone’s couch.
Or missing a bathroom.
Or not taking a shower.
Or having anything coutre.
Men are like dogs
Women are like cats.

Women want to know if this is all worthwhile
Can I make a living doing this or should I  look somewhere else?
Do something else?

Men never look at it that way
They’re content to keep plugging away
Something will happen
Something good will come of this
They don’t give it a timetable
Or even measure success.

And they don’t look at it as making a sacrifice
It’s just the way it is.

Maybe it’s the hunter in us
Not willing to look at the danger.
Maybe that’s why far fewer women than men are struck by lightning.

As our next speaker heard author/actor Ethan Hawke talk about his new book. Hawke said:
Whether or not he would receive a positive response was unpredictable,
But in the meantime he described the experience of doing it (and possibly failing)
Like being on a boat and vomiting over the edge
In front of onlookers.

Our speaker demonstrates that ignoring a dim future can lead you to the light.