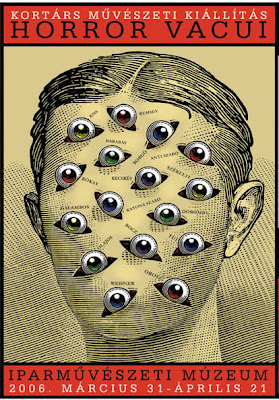 István Orosz (1951), one of the most prolific and best known printmakers, graphic artists and animated filmmakers of Central Europe has been creating his trademark art often employing forced perspectives, anamorphoses, illusions and impossible objects since the 1970s. Initially best known for his prints (including film and exhibition posters), his resumé has expanded to include unique trompe l’oeil graphics and some of the most inspired animated films to come out of Hungary (or Europe, for that matter).

He has had individual shows in Chicago (I Space Gallery), The Hague (Escher Museum) and over a dozen other major cities and art centers. Prizes awarded to István Orosz include the Gold Medal at the Biennial of Graphic Design (Brno), the Creative Distinction Award of the European Design Annual (Dublin), the Gold medal at the Annual Exhibition of the Society of Illustrators (NewYork) and the Main Prize of the KAFF Animated Film Festival (Kecskemét).

The opening will be followed by a reception with the artist.