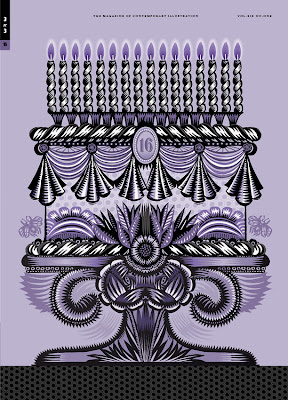 We’re happy to announce that the next issue of 3x3 has gone to the printer's—a tad bit late as usual but I think you're in for a tasty surprise.

We’re marking a milestone as we begin Volume 6 of 3x3 and to celebrate that occasion we selected three stellar female artists with di-verse backgrounds and cultures.

Q. Cassetti has spent the better part of her life as a graphic designer but chose to move into the world of illustration, first exploring that prospect at Syracuse University, and then on to a master’s degree at the University of Hartford. Her design and illustration clients include Steuben Glass, the Corning Museum, Tiffany & Co., Estée Lauder, T. Rowe Price and FreeRein Wines. Her work has been honored by Communication Arts, Illustration West, American Illustration, 3x3 Magazine and the Society of Illustrators. Thanks to Ursula Roma for her insightful article.

Monika Aichele is a world traveller. Currently she is splitting her time and studio space between Berlin and Munich but has also lived in New York and Barcelona. Her work has been exhibited in those cities as well as London, Rome, Naples, Venice, Tokyo, Lisbon and in the Centre Pompidou in Paris. Her clients include The New York Times, The New Yorker, Time, Entertainment Weekly, Random House, Princeton Architectural Press, Bloomsbury, The Walrus, Der Spiegel and Universal Music. The Society of Illustrators, Society of Publication Designers, The Art Directors Club of New York, American Illustration, Print and 3x3 have all honored her work. Mareike Dittmer provided us a close-up look at Monica.

Mari Mitsumi is still fighting rolling blackouts in Yokohama south of Tokyo as we go to press. A graduate of Toyo Eiwa Jogakuin junior college she started her career as an editor before moving into illustration thanks to the Setsu Mode Seminar, a leading illustration school in Japan. She has been a freelance illustrator since 1995 working for clients in publishing, editorial and advertising. She also exhibits her work throughout Japan and has received recognition from American Illustration, Society of Illustrators and 3x3 Magazine. Her clients include AIG, All Nippon Airways, GQ Japan, Columbia Music Entertainment and various Japanese publishers. Fellow illustrator, Hiromichi Ito provided the lovely article—he painted with prose.

This issue’s Icon is Ralph Steadman who along with Hunter S. Thompson collaborated on the birth of gonzo journalism. In addition to work for Rolling Stone, he has illustrated numerous books including Alice in Wonderland, Treasure Island and Animal Farm, not to mention wine labels and children’s books—both as a illustrator and writer. Gary Taxali catches up with Ralph as they talk about his latest projects.

We didn’t have to look far for this issue’s illustrated campaign, walk into any subway station in New York and you’ll see the work of the Metropolitan Transit Authority’s Arts in Transit program. Guided by Sandra Bloodworth, a recognized artist herself, Sandra oversees the department that commissions both illustrators and fine artists.

We travel to Milan for our art director profile and while Paolo Canton doesn’t assume that title, his company Topipittori works with illustrators from all over the world in developing children’s and young adult books and graphic novels. Educated as an economist he and his wife, Giovanna Zoboli, split their time between Topipittori and their design consultancy Calamus.

CareerTalk continues with a focus on developing successful promotion campaigns and building a targeted prospect list.

Thanks to Olaf Becker for Monika’s studio images and Junei Sakano for Mari’s, Q. provided her own photos.

Issue 16 will be on newsstands in the US at the end of April, mid-May in the UK and Europe.